Why am I launching She-VC with 'Women in VC' global community?


Venture capital is often called a ‘bro industry’ and the reasons are many. I was told that I may be the first female General Partner in a sports VC fund and I was shocked that we are still talking about firsts in 2018/2019.

“Greater diversity yields higher returns. Startups with a female founder generated 78 cents of revenue for every $1 of funding, while male-founded startups generated 31 cents, according to a BCG study of 350 startups.” — CNBC Report, 2018. More diverse management teams have 19% higher revenue due to innovation, BCG study reports. “Teams with an equal gender mix perform better than male-dominated teams in terms of sales and profits.” — reported by Harvard Kennedy School study on The Impact of Gender Diversity on the Performance of Business Teams: Evidence from a Field Experiment.

In an industry where only 2.2% of the VC money goes into female founded startups, it surprises no-one that we will find women in associates, principals and operations role in a VC Fund, but very few in the Partner role. Female venture partners make 9% of the industry and out of which only 20% of female Partners invest at the growth stage and 37% at Series B rounds. This means fewer checks for women founded startups in Series B rounds and beyond, where the struggle to raise fund becomes harder.


How can we ALL participate in fixing this huge gender gap? Can we bring more women investors to tell their stories to inspire and induce capital deployment in this under represented community?


It is impossible to create change if we keep telling the same stories of male Partners in all our favorite VC podcasts and interview platforms. Very rarely women VCs get featured every week in such story telling. Let’s sow the seed of gender equality and diversity in the lookalike Patagonia vest bunches (pun intended) to include a broader class of investors, entrepreneurs creating new market behavior in various investment verticals.

“Story telling has always been the most powerful way to put ideas into the world” — Robert Mckee.

If we want to be inclusive, people need to identify with our stories. There are women out there thinking whether their ideas are worth sacrificing their day job and taking the plunge into the entrepreneurship world. There are women who want to get into venture capital but do not see a representation in their verticals. When women see their struggle in the life of the other female investors/VCs/entrepreneurs, their conviction transcends into perseverance and their stories become the vision of the future. The power of such stories creates the future where the venture capital glass ceiling has been broken with representation and capital deployment in the under represented community.

Today when USWNT made history, Nike aired one of their gender empowering ads with the voice of Meghan Rapinoe saying:

““I believe that we will make our voices heard, and tv shows will be talking about us every single day.. and not just once every four years.. and that woman will conquer more than just a soccer field, but breaking every single glass ceiling, having their faces carved on Mount Rushmore, and we’ll be fighting not just to make history, but to change it…. forever.”

This team wins. Everyone wins.” 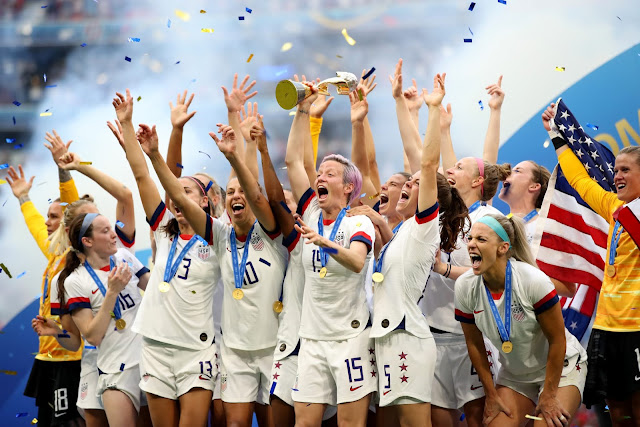 If we see the future to be women and equality, we need to invest in women and tell the stories of brave women who created the cultural shifts.
I have been working on this for the past few months and super excited to launch She-VC interview platform in partnership with Hackernoon and “Women in VC” global community. The “Women in VC “ Directory, created by Sutian Dong, Partner at Female Founders Fund, and Jessica Peltz-Zatulove, Partner at MDC Ventures is the largest self-reported directory of 1700+ women VCs at over 1100+ VC funds across 46 countries.

We will learn and unlearn from the stories of incredible game changing women VCs on topics such as founder market fit, creating a new fund, fundraising from LPs, investing in single founder myth, art of selling as a VC, sexism, VC partnerships, syndicate deals, science of deal flow, investing in early stage/ later stage, board management, art of deal making through term sheet, finding unicorns, VC power law, understanding investor mindset, art & science of valuation, fund economics, exit strategy, startup failures, VC FOMO, VC growth mindset and many more. As you will hear stores of sexism there will also be great stories about support and initiatives from male partners/peers who are advocating gender equality.

She-VC will feature unconventional investment stories and women VC voices that need to be heard, who wanted to change the venture investment world and yes she did.

Let’s emphasize on intellectual diversity so as to reflect in our advocacy towards gender equality.

Welcome to She-VC, where investing with her is the future.

She-VC was nominated for Hackernoon top tech award in 2019.

Women in VC Directory
The world’s largest global directory for women in venture capital to find each other, connect, and collaborate.women-in-vc 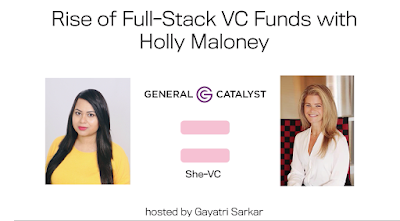 She-VC: VC is a very hard industry to prepare for. There is no MBA or coursework that prepares you for early stage or late stage investing. Tell me about your past experiences that helped you to be in the growth fund manager role. It is said that venture capital is all about identifying patterns in time. Yet some of the bigger ideas are unpredictable and sometimes those investment decisions can be non-consensus among Partners. To invest in such unpredictable big ideas one has to learn and see things differently, analyze markets that others are finding it non-sexy to invest. Can you elaborate about the new market opportunities for emerging growth fund managers? And how has the market changed in the last 5 years? Venture Capital is one industry that has not been disrupted.. As we are seeing more people bringing movement into this industry how do you see biases and preju… 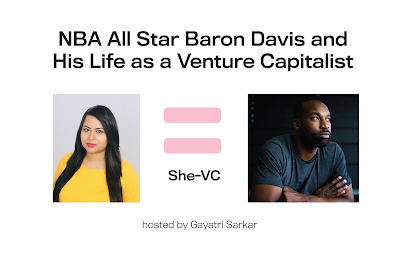 Baron Davis, two time NBA All Star.  Played against New Orleans Hornets, Golden State Warriors, Los Angeles Clippers, Cleveland Cavaliers and New York Knicks. Baron has played college basketball for UCLA, where he was an All-American honoree before turning professional after his sophomore year. He was a star high school player and a prodigy while at Crossroads School. Beside NBA career, you have increasing role in the film industry, member of the Screen Actors Guild. In 2016, Davis created the Black Santa Company, November 2019, Davis joined an advisory board for Tinley Beverage Company Inc. You have made 17 startup investments that incudes Overtime, Uber, Cloudbase and many unicorns.

She-VC: NBA All Star Baron Davis, life as a Venture Capitalist, learning from Kobe Bryant, David Stern and playing against Michael Jordan, Shaquille O'Neal 1. Please talk about your hugely successful NBA All Star BIG Summit and what is your motivation behind such a platform? 2. VC is a very hard indus…